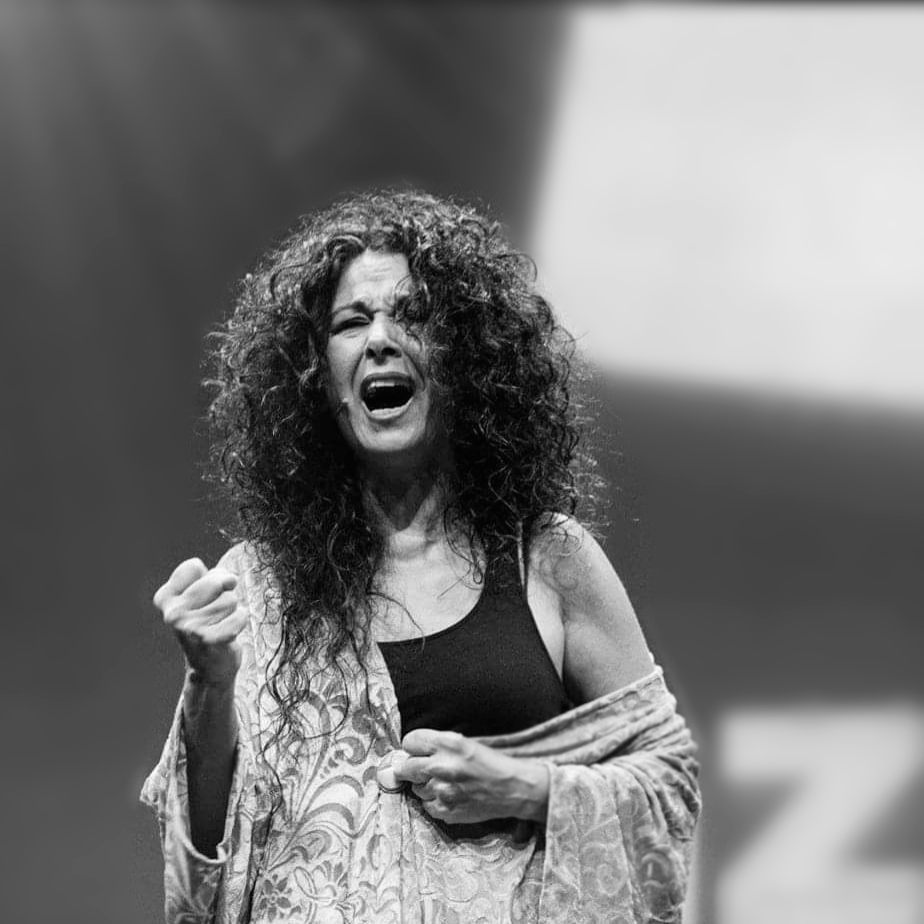 As with a great performers, she began singing in the various taverns of Seville, including La Sonanta, La Yerbabuena and Pata Negra, among others. Then she moved on the work at Flamenco Clubs such as that of Mairena, Olivares, Torres Macarena, etc. A further step in her career took place when she was called to work at several theatres: Teatro Civico de Mairena (Civil Center Theatre), Diputacion de Sevilla (Seville Provincial Government), Certamen La Cultura Gitana tambien es Cultura (The Wanderer Culture is also Culture Seminar). In 1996, 97 and 98, she performed at La Carbonería an emblematic venue for Flamenco in Seville where she produced her own Flamenco and fusion show. Throughout those three years, she shared the stage with Martín Chico (son of Juana la del Revuelto), Juan El Cama, Luis Peña, Raul El Perla, Manuel Brenes El chino, Mari Bizarraza, La Tana, Rafael Camarón, etc. Between 1999 and 2001, she worked at several Flamenco clubs and other prestigious theaters in Belgium, such as the La Peña Andaluza (Flamenco Club).

in Antwerp, the Peña Taranto in Brussels, where she coincided with prestigious performing artist such as Maite Martín or Miguel Poveda. She also participated in the Feria del Toro de Dax (Bull-fighting Fair in Dax, France) at the Peña Enrique Ponce. Upon returning to Spain in 2002, she worked at the Lola de los Reyes dance hall in Seville and participated in several episodes of the María del Monte TV show for Canal Sur (regional television channel). It was during that time that she recorded the chorus for the record El calli and participated in La Navidad Flamenca (Flamenco Christmas) organized by the Cordoba City Hall. In 2005, she became a member of the María Serrano Company cast of artists performing throughout Europe, Asia and America with two shows: Carmen and Flamentango As of 2005, she began performing at the La Madruga dance hall in Seville, and also participated in a Canal Sur TV musical show titled Punto y Medio presented by Juan Imedio. After that, Falete called her to become a member of his tour Amar Duele to perform at 70 concerts all over Spain, and repeating with the record Puta Mentira. Currently, they are preparing another concert tour. Recently, she participated in the studio recording of record by Pepe El Marismeño, Alicia Gil, El Bicho, etc. She is soloist for the Amador Rojas Company that is currently offering the show Kahlo Caló. As a soloist Roberto Olivan Enclave Danza Company, she has participated in his show Mermaid’s call. She participated in the Larachi III Festival in Paris. She participated in the Women’s Flamenco Singing Festival (Festival de Cante Flamenco de mujeres) in Paris and toured Eastern European countries with Romani Music Festival (Festivales de la música Romanó). She is a soloist for the Flamenco Clubs with the Andalusian Regional Government (Peñas Flamencas de la Diputación de Andalucía). She is a member of Mistela Dance Company since 2009 with the show Flamenco viene del sur (Flamenco comes from the South). She participates in the Francisco Escobar Show Contratiempo tuat premiered at the University of Seville in 2009. For the past year and a half, she has been the main singer for Cordovan dancer Encarna Lopez. / As of 2009, she was the main singer for Cordovan dancer Encarna Lopez for more than a year and a half. In July of 2010, she worked for the Brussels Symphonic Orchestra for the presidential handover. She is the soloist in the Carlos Carbonell Company and his show in Italy titled 8 Codigos (8 codes). In 2010, she was the soloist in the Argentina tango show titled Tango de los pies al corazón (Tango from Head to Toe) at the Haagen Dazs-Calderon Theatre in Madrid. 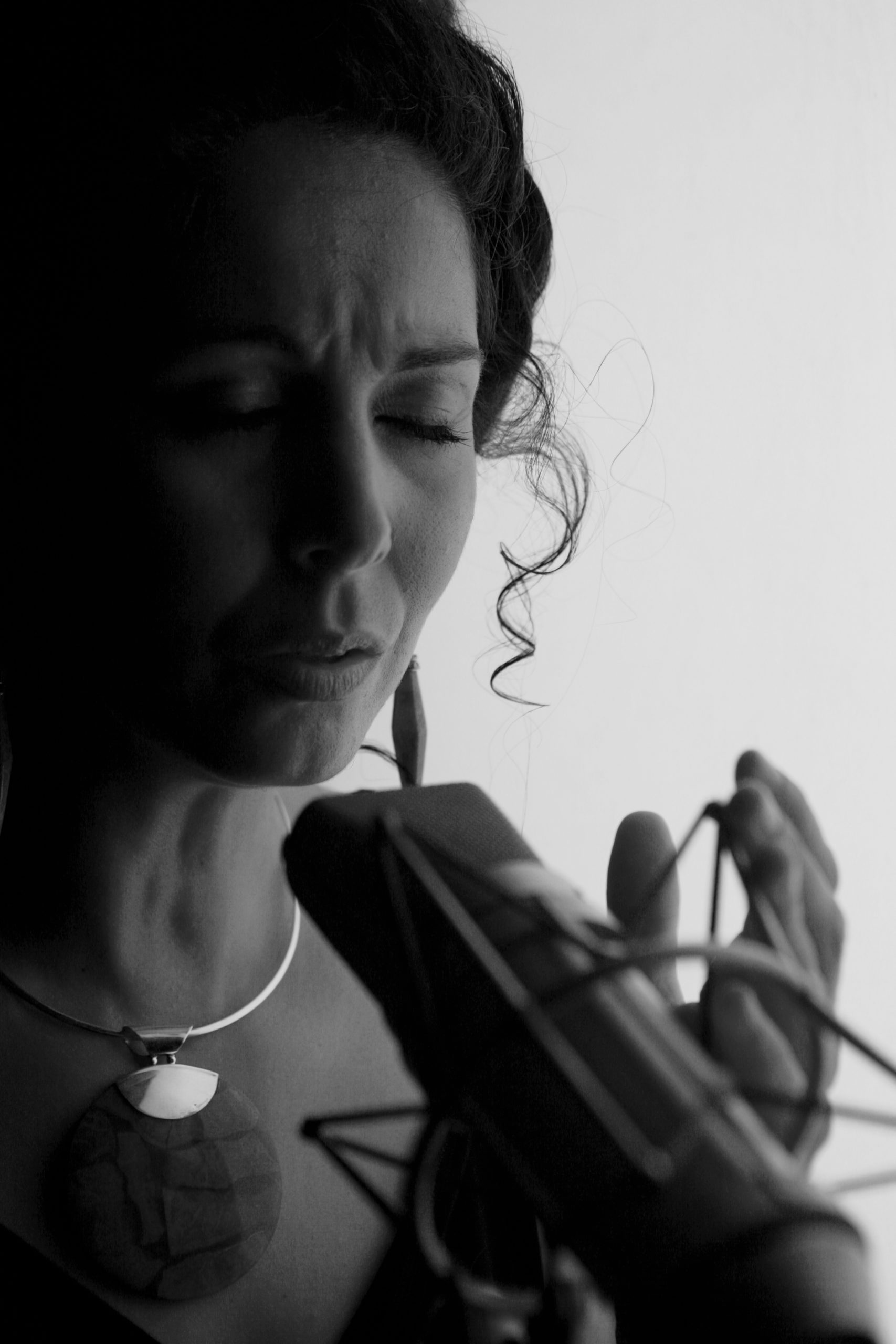 She is a member of the show Abandoneado by the Luis Caruana Tango Quartet. In 2010, she also participated in the Sangre Nueva (New Blood) course organized by Paco Ortega at the Madrid Theatre. That same year at the Flamenco Biennale in Seville, she was a member of the Ruben Olmo show titled Tranquilo Alboroto. She participated in Tito Losada’s Misa Flamenca that toured the world. “Este es mi jardin,” her first record, premiered at the “2011 Deltebre International Dance Festival” /“Festival Internacional Deltebre Dansa 2011” Throughout 2012, she worked in Tito Losada’s Misa Flamenca show that toured Latin America together with dancer Antonio Canales. As the soloist in the Tango-Flamenco show Complices, she appears with renowned Tango dancers Pilar and Claudio Hoftman as well as Flamenco dancer Juan de juan, together with musicians Pablo Maineti and César Angeliri. In 2012, she participated in the Seville Biennale together with Flamenco dancer Manuela Carrasco in the show Raíces de Ebano (Roots of Ebony) and dancer José Galán in the show En mis cabales (I’m not Crazy). She is the soloist in the Laura de los Angeles show titled Mi nueva esperanza (My New Hope) and in the Christmas show El día que Jesus no queria nacer (The Day Jesus didn’t Want to be Born), a carol narrated by writer Antonio Barbeito, with musical director Jesús Bola. As a member of the choir, she worked in the new project of Duquende 2012 called Rompecabezas (Puzzle) directed by Pepe de Lucía and Jesús Bola. In July of 2016, she appeared at the Tablao Palacio in Barcelona. In August of that same year, she sang at the Tablao Corral de la Morería. At the 2016 Biennale, she appeared as a soloist with dancer Olga Pericet. From 2016 to 2019, she was the soloist for the company shows Amazonas and Flamenco Kitchen directed by Juana Casado. After the premiere of Flamenco Kitchen at the Jerez Festival, she toured theatres throughout Spain. The same held true for the show Amazonas that took her on tour to Latin America. Soloist in the show Un Cuerpo Infinito (An Infinite Body) by Olga Pericet, she toured New York, including the Repertorio Theatre and several theatres in Spain. She was the soloist in the Flamenco show Flamenco Trane, premiered at the Fernan Gomez theatre in Madrid for JazzMadrid19 Festival, directed by Guillermo McGill. Collaborating with the project Chiqui Cienfuego Trio, she was the soloist who visited several theatres in Spain and Portugal, directed by pianist Chiqui Cinfuego. Currently, she continues to present the aforementioned shows, and is involved in a project at Corral de la Morería venue titled Zincali and directed by maestro Antonio Najarro for the choreography and maestro José Luis Montón holding the baton. 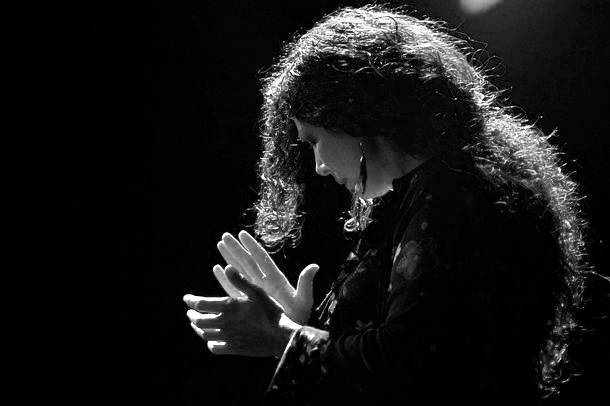